France’s bonds jumped, with the 10-year yield dropping to its lowest level in three months, after centrist Emmanuel Macron and nationalist Marine Le Pen won the first round of the nation’s presidential election.

The yield spread between French 10-year securities and benchmark German bunds narrowed to the lowest since January. A place for Macron in the second round avoids investors’ nightmare scenario of a contest between the anti-euro Le Pen and the Communist-backed Jean-Luc Melenchon. This also boosted risk assets such as higher-yielding bonds from Italy and Spain, while France’s CAC 40 stock index climbed to a two-year high.

The euro surged to its strongest level in five months against the dollar before paring some of its gains as the market’s focus shifted to a proposed U.S. tax cut. 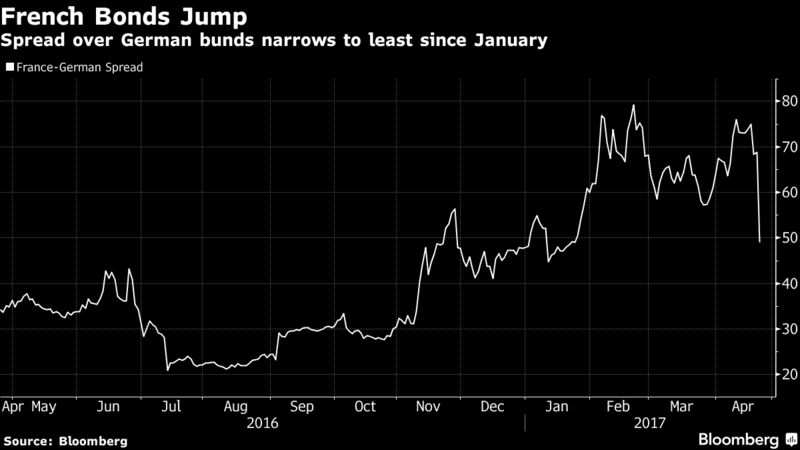 “There was obviously concern that we might get two populist candidates facing off each other,” said Lyn Graham-Taylor, a rates strategist at Rabobank International in London. “It is a bit of a relief on the back” of the results. “We will give back a little bit of these gains through the course of the morning.”

Macron, a first-time candidate and political independent, had 23.8 percent in Sunday’s election and National Front leader Le Pen had 21.5 percent, according to results from the Interior Ministry based on 97.4 percent of votes counted. The result lowers risk for the euro zone after a year of polling upsets and political turmoil driving currency volatility, from the U.S. elections to Italian and British referendums.

Fast-money accounts were seen covering shorts in French bonds, with hedge funds selling in Treasuries, said one trader in Europe, who asked not to be identified as they weren’t authorized to speak publicly.

Investor attention will now turn to the second round, for which Le Pen has trailed Macron in most opinion polls by a margin of some 20 percentage points. If Le Pen were to produce an upset and become president, the euro would tumble to a 15-year low to below parity with the dollar, in a reaction similar to that seen in the pound following the U.K.’s Brexit vote, according to economists surveyed by Bloomberg.

“All the polls are saying Macron’s got a lead of 20 percentage points in the second round and that’s held steady,” Rabobank’s Graham-Taylor said. “The only slight concern is that about 40 percent of the first round voters went for the populist-type candidates between Le Pen and Melenchon.”

“The fact that the identity of the two opponents in the second-round run-off is now clear probably spells significantly less uncertainty for financial markets,” said Christoph Kutt, head of rates strategy at DZ Bank AG
“Financial markets are already showing some relief in reaction to the news: Bund yields are rising while EMU spreads, above all on debt instruments issued by the periphery, are narrowing,” he wrote in a client note
“It seems quite conceivable that this development could carry on for some time to come because risk premiums, which have spiked up in recent weeks in response to the uncertainty over the election in France, might at least in part unwind again”
“EUR and risk sentiment could remain supported at the start of the new week. Unwinding of pre-election hedges could boost the outlook for the single currency against safe havens JPY and CHF,” said analysts at Credit Agricole including Valentin Marinov in a client note
“EUR/USD could remain close to the highs of the year as well. That said, we note that a gap has opened between the elevated FX spot and the still relatively low EUR-USD 2Y rate spread”
EUR/USD could remain supported also given the lingering uncertainty about President Trump’s tax reform and ahead of the Friday’s vote in the U.S. congress on the continuing resolution to avoid a potential government shutdown, they write


Mr Draghi said that the ECB would continue its stimulus programme buying bonds, adding that the "ECB will be in the market for a long time".