Over a decade ago, when Berlin struggled to attract investment, then-mayor Klaus Wowereit famously called the German capital “poor, but sexy.” After a boom that drove up rents by more than 50% since 2011, the city may return to that era -- just not as cheap.

By freezing rents for five years, the local government is taking the most radical step yet to protect residents from the fallout of a housing crunch. While the move could provide short-term relief, the risk is a bigger hit down the road. Capping rents threatens to scare away investment, stalling everything from upgrading windows to constructing much-needed new apartments.

“This will do immense damage to Berlin’s image,” said Klaus-Peter Hesse, managing director of Germany’s ZIA real-estate lobby. “It’s bound to strain the city’s relationship with investors; anyone planning a housing development may well be having second thoughts now.” 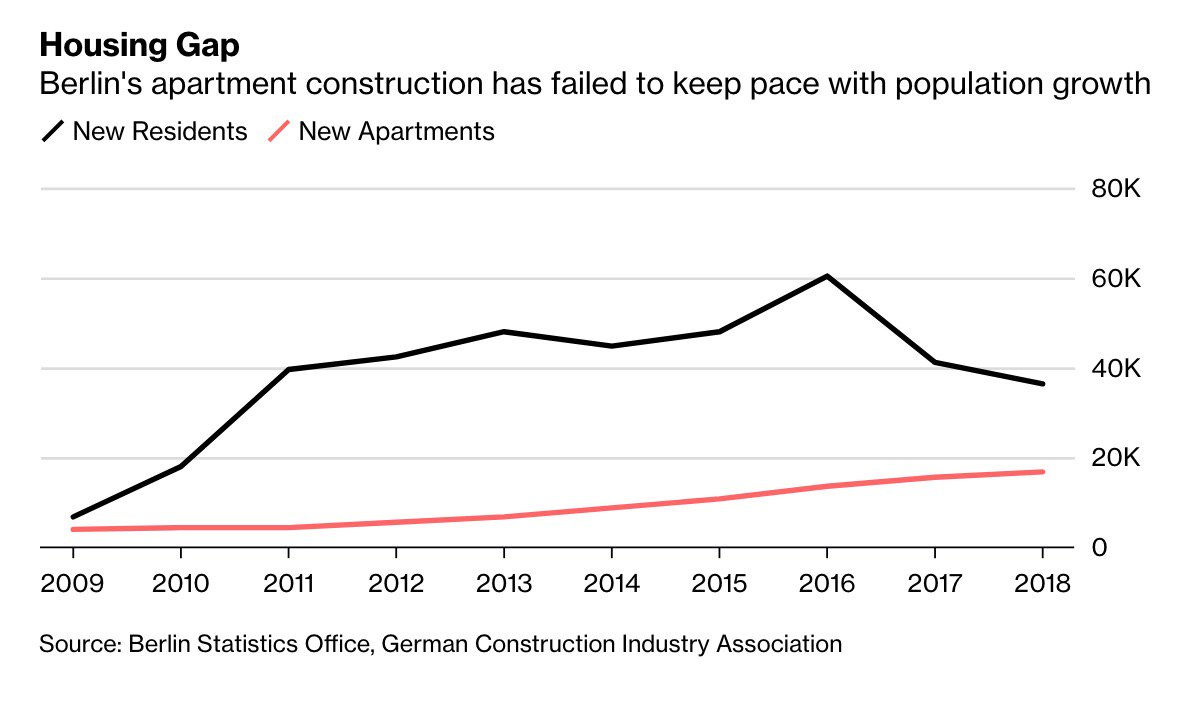 Prodded by mass demonstrations and a grassroots initiative to force the government to buy out large landlords, Berlin is looking to suspend market forces in the housing sector. The legislation, due to go into effect next year, will freeze rents for five years and set caps for each neighborhood, so that people paying more can demand a reduction.

Read more about a Berlin movement to expropriate large landlords

“Tenants will no longer be subject to constant rent increases and the pressure that comes with that,” said Katrin Lompscher, Berlin’s senator for housing, as she presented the plan on Tuesday. “Shelter is a basic need.”

The rent-control measures would be backdated to the day of the announcement to prevent landlords from jacking up rates preemptively, and property owners that break the rules could face a fine of up to 500,000 euros ($564,000), underscoring the city’s determination to help renters, which make up the majority of Berlin’s population.

Still, real-estate experts and big landlords argue that relaxing construction regulations and accelerating approvals would do more to ease the crunch. Building an apartment block in Berlin can take as long as 15 years from conception to completion, around twice as long as in the U.K., according to ZIA’s Hesse.

When Lompscher was asked about a plan to boost supply, she said: “It wasn’t on today’s agenda.”

Missed Opportunities
Some have accused Berlin’s government of contributing to the housing crunch by prioritizing vanity projects. Here’s a few high-profile cases:
*Renaissance Remake -- The 600 million-euro construction of a replica of the former city palace, which was blown up after World War II, will add more exhibition space to the Museum Island in a project more for tourists than residents.
*U-Bahn Excess -- At a cost of around 525 million euros, Berlin is digging a tunnel under the Unter den Linden boulevard to extend a subway line to link the main train station with Alexanderplatz, which are already well connected by public transport.
*Airport Fiasco -- The city’s efforts to replace Cold War-era airfields with a modern hub is eight years late and counting. Costs have risen to over 7 billion euros, more than triple the original budget. The delay means the site of the more central Tegel airport can’t be redeveloped.
*Tempelhof Retreat -- When the government did try to sell some land to developers, it bungled the effort. A 2014 referendum forced the administration to abandon the plan to slice off bits of the defunct Tempelhof airport, which occupies an area larger than Monaco near the city center.

While Berlin’s rent freeze is an extreme reaction, the lack of affordable housing has become a global issue. Governments from Amsterdam to Vancouver are struggling to find ways of preventing tenants from being priced out of their own neighborhoods. The public backlash in cities including New York and Hong Kong has prompted political action.

Spain has tried to control rents, but to limited effect. In May, two months after the government imposed a battery of measures to keep costs down, rent increases actually accelerated to 7.5%.

Similarly, Berlin’s move risks exacerbating the problem by discouraging spending. That raises the prospect of at least a partial return to the days when Berlin was a real-estate backwater, marked by rows of dilapidated buildings and vacant lots.

“This will definitely have a big impact on everyone in the construction industry, from big developers to craftsmen such as parquet-floor makers,” said Manja Schreiner, managing director of the Building Trades Association. “It’s a big worry, particularly for the smaller companies.”

There’s a little chance that investors will get a break soon. While Berlin’s move is sure to be challenged in court, “a legal contest of such law can be lengthy and may only start after it’s in place,” Bloomberg Intelligence analysts Iwona Hovenko and Sue Munden said in a note.


Big landlords are trying to shift the government’s course. Deutsche Wohnen SE, one of Berlin’s biggest property owners, suggested linking rate increases to incomes and proposed quotas for the construction of apartments for low-income households. The company also urged the mayor to invite all stakeholders to a residential real estate summit.

The freeze in its current form may cause “chaos and discord,” Deutsche Wohnen Chief Executive Officer Michael Zahn told the Berlin-based Tagesspiegel am Sonntag newspaper.