"We don't perceive that there is a national bubble" A. Greenspan, 20/05/05
"We do not expect significant spillovers from the subprime market to the rest of the economy or to the financial system" B. Bernanke, 17/05/07
Haut

The worldwide rise in house prices is the biggest bubble in history. Prepare for the economic pain when it pops 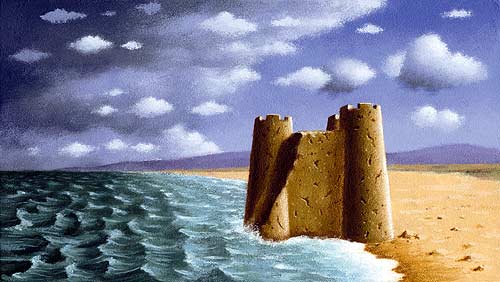 NEVER before have real house prices risen so fast, for so long, in so many countries. Property markets have been frothing from America, Britain and Australia to France, Spain and China. Rising property prices helped to prop up the world economy after the stockmarket bubble burst in 2000. What if the housing boom now turns to bust?

According to estimates by The Economist, the total value of residential property in developed economies rose by more than $30 trillion over the past five years, to over $70 trillion, an increase equivalent to 100% of those countries' combined GDPs. Not only does this dwarf any previous house-price boom, it is larger than the global stockmarket bubble in the late 1990s (an increase over five years of 80% of GDP) or America's stockmarket bubble in the late 1920s (55% of GDP). In other words, it looks like the biggest bubble in history.

But even if prices in America do dip, insist the optimists, they will quickly resume their rising trend, because real house prices always rise strongly in the long term. Robert Shiller, a Yale economist, who has just updated his book “Irrational Exuberance” (first published on the eve of the stockmarket collapse in 2000), disagrees. He estimates that house prices in America rose by an annual average of only 0.4% in real terms between 1890 and 2004. And if the current boom is stripped out of the figures, along with the period after the second world war when the government offered subsidies for returning soldiers, artificially inflating prices, real house prices have been flat or falling most of the time.

Even a modest weakening of house prices in America would hurt consumer spending, because homeowners have been cashing out their capital gains at a record pace. Goldman Sachs estimates that total housing-equity withdrawal rose to 7.4% of personal disposable income in 2004. If prices stop rising, this “income” from capital gains will vanish.

And after the gold rush?
The housing market has played such a big role in propping up America's economy that a sharp slowdown in house prices is likely to have severe consequences. Over the past four years, consumer spending and residential construction have together accounted for 90% of the total growth in GDP. And over two-fifths of all private-sector jobs created since 2001 have been in housing-related sectors, such as construction, real estate and mortgage broking


Japan provides a nasty warning of what can happen when boom turns to bust. Japanese property prices have dropped for 14 years in a row, by 40% from their peak in 1991. Yet the rise in prices in Japan during the decade before 1991 was less than the increase over the past ten years in most of the countries that have experienced housing booms (see chart 3). And it is surely no coincidence that Japan and Germany, the two countries where house prices have fallen for most of the past decade, have had the weakest growth in consumer spending of all developed economies over that period. Americans who believe that house prices can only go up and pose no risk to their economy would be well advised to look overseas.