Orbital Insight, a startup backed by heavyweights like Alphabet's GV and Goldman Sachs, has an unusual way of calculating supply that involves satellite imagery, radar, and computer vision.

The result is one of the world's largest catalogs of oil inventories, which shows an increase of a stunning 140 million barrels in oil storage in just the past 30 days.

Orbital, founded in 2013, tracks the world's oil supply — not just by using shadows but also by bouncing radar pulses off of oil tanks.

The startup has caught the attention of not only major oil companies and analysts but also heavyweight investors including Alphabet's venture arm GV, Goldman Sachs, Sequoia Capital, and Chevron, which have together poured more than $125 million into the company. 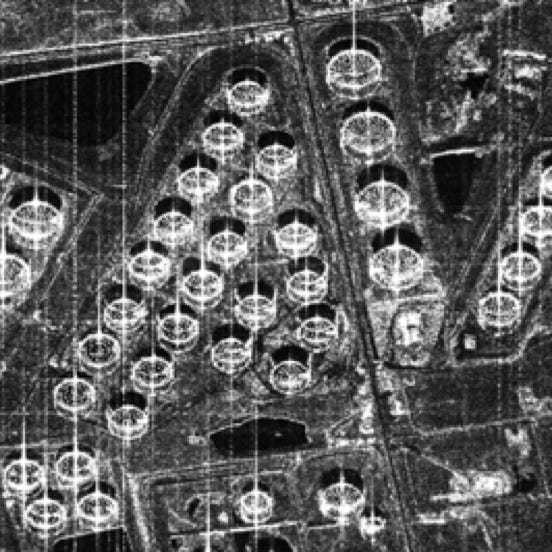 (...)The company relied on what's called computer vision. Basically, you feed a computer images of what tanks look like from space until it begins recognizing them on its own, in the same way that Facebook is able to automatically recognize your friends' faces.

Through that process, the firm found thousands of floating-roof tanks, which account for most but not all of the world's oil storage. The tanks are named after lids that float on top of the oil to prevent emissions and the buildup of explosive gases. The tops rise and fall with the oil inside.

The next hurdle was measuring how much oil was in each of them.

The firm first uses more computer vision and some hefty math to measure two shadows. A shadow on the outside helps the company calculate the size of the tank, while the shadow formed by the tank's rim shows how far down the roof has fallen, a proxy for how full it is.

Orbital also measures how full each tank is by using beams of radar emitted by satellites. Radar is especially useful for parts of the planet that are covered by clouds, which these beams can penetrate.

"You get two pulses: one from the rim of the tank and one from the roof," Crawford said. "You can tell how full the tank is by looking at the difference between those two bounces."

All in all, Orbital analyzes about 300 million square kilometers of imagery every year to estimate the global volumes of oil storage, the company said.

(...) Orbital's database — which the company said is "likely the largest catalog of tanks and tank locations in the world" — has shown that the quantity of oil in storage has increased by more than 200 million barrels compared to last year. The vast majority of those barrels, about 140 million, were added in just the past 30 days, the firm said.

Orbital observed an especially steep hike in storage in China and among OPEC countries.

(...)"Because of what's going on in China and OPEC, we're up to really unprecedented numbers in terms of global storage," Crawford said. "Just crazy increases."

In China, Crawford said storage tanks were nearing about two-thirds capacity. The US isn't looking great either.

"Crude builds in April will reduce available crude capacity by a third, leaving, in theory, about 200 million barrels of storage capacity (or two more months at the same filling rate)," Rystad wrote in a recent report.

That's bad news for oil prices, as the markets showed on Monday. The price of US crude for May delivery plunged into the negative double-digits for the first time in history.

At the end of the day, it was a problem of storage. With nowhere to put oil, there were hardly any physical buyers bidding for May futures contracts. So traders had to pay them to take the oil instead.