Senate Republicans this week proposed a new plan that would not reinstate the recently-lapsed federal eviction ban, which carried a stay for rent due for one-third of renters. Adding to the strain, enhanced $600 weekly federal unemployment benefits are set to evaporate this Friday.

Without a solution soon, the likely result “will be a staggering surge in homelessness unlike anything we have seen,” said John Pollock, a Public Justice Center attorney and coordinator of the National Coalition for a Civil Right to Counsel (NCCRC), which helped develop the eviction tracking tool with Stout, Risius and Ross.

The unprecedented amount of back rent is not a macro-economic game changer, said Moody’s Analytics Chief Economist Mark Zandi. But for renters, “it’s catastrophic. Very few people will be able to pay this back,” he said.

A debt spiral could haunt displaced tenants “for a lifetime,” he added.

Over the spring and early summer, as unemployment surged to levels unseen since the aftermath of the 1930s Great Depression, a patchwork of federal, state and local eviction bans kept renters in their homes.

On Friday, the eviction ban that covered the third of renters in buildings with mortgages backed by the federal government lapsed. The rent deferred over four months is now due, as is all the rent where local and state moratoria on evictions have also ended.

When rent goes missing over such an extended period, the low-end of the market becomes a house of cards and “it starts to fall down,” said Emily Benfer, who co-created the COVID-19 Housing Policy Scorecard at Princeton University’s Eviction Lab, a national research center on evictions.

The Democratic-controlled House of Representatives passed a measure in May that would have extended the enhanced jobless aid through January and allocated $100 billion for rental assistance. It would also have extended the federal ban on evictions for up to one year.

The Republican-controlled Senate package unveiled Monday focuses on getting kids back in school, workers back to work and winning the fight against the virus, the Office of the Senate Majority Leader said in a statement.

It proposes cutting the enhanced unemployment assistance to $200 a week, and does not mention housing, evictions, or reinstating the eviction ban.

The Senate Republican Communications Center did not respond to requests for comment.

“I can’t answer that yet,” he told reporters when asked about an extension of the eviction moratorium. “There will be something, I hope, dealing with rental assistance.”

An avalanche of filings are hitting eviction courts nationwide, as hearings ramp up again online, in courtrooms that require social distancing, and even at the Columbus, Ohio convention center. In July alone, 21% of renters paid no rent, according to research firm Apartment List.

Stout and the NCCRC analyzed census survey results and income data to create their eviction tracker, which uploads data weekly. Of the 44 million U.S. renter households, 17.3 million are unable to pay rent and risk eviction, the tracker estimates. 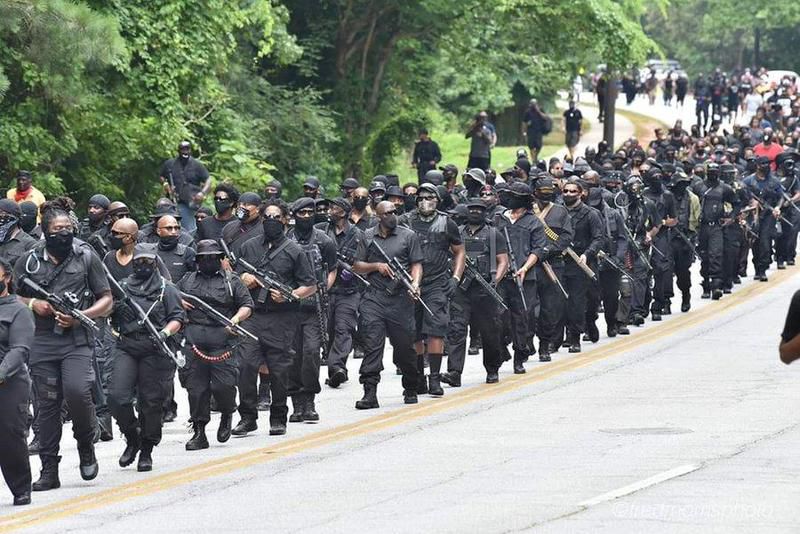 La milice noire NFAC au Mount Rushmore, 4 juillet 2020
We can be heroes just for One day


Exxon Gets Kicked Out Of The Dow Jones Industrial Average

Exxon is being kicked out of the Dow Jones Industrial Average index, where it has had a place since 1928. The reason: the Dow needed to make space for other, more valuable companies—and Apple’s stock split, CBS News reports.

The change will be effective on August 31.

Exxon, which was the oldest member of the index for the last two years after Dow removed GE, has been one of the most valuable companies in the U.S. and the world for decades. That is until Big Tech showed up and began changing the world, its stock reflecting this change by swelling market caps.


When Apple recently passed the $2-trillion valuation mark for a few hours, it became the most valuable company in the world.

Meanwhile, Big Oil—and Exxon specifically—hasn’t been faring all that well. Energy, which featured solidly on the index and in people’s lives a few decades ago, is being booted out by technology—Exxon’s replacement on the DJIA is a software company, Salesforce.

And then there is the climate change narrative and the accusations that Exxon knew about it but did not do anything about it. And it is not doing anything about it still, according to critics, unlike European supermajors, which are all but racing towards renewables.


Meanwhile, the double blow from the Saudi price war and the pandemic hit the world's largest public oil company hard. Exxon reported two quarterly losses this year, blaming oil prices and the effect of the pandemic on oil’s fundamentals. It is reducing its production in the face of lower demand and adjusting its spending plans like its peers to weather the worst of the crisis.

In the end, however, it is just about its share price. At a little over $42 a piece at the time of writing, Exxon is just too cheap for the DJIA, cheaper than the only other remaining energy company on the index: Chevron. Chevron is trading above $82 per share.


U.S. gas prices at lowest since 2004
For those getting in the car and traveling over Labor Day weekend, there’s good news.

According to the Energy Information Administration, U.S. gasoline prices are at their lowest since 2004.

“U.S. gasoline prices are relatively low because of continued low demand for gasoline since mid-March, when travel demand fell because of efforts to limit the spread of coronavirus,” the EIA said.